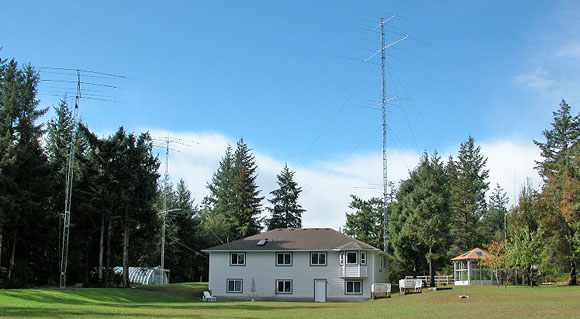 While taking an electronics course at JM Perry Institute in my home town of Yakima, WA, I became interested in ham radio through another student, Dermot K7KNU. I got a novice license as WN7DOW in 1964.

Later that year, I visited another ham -- Glen W7ADS -- who had a big station. He was drinking coffee with his left hand, sending CW with a bug with his right hand, and talking to me at the same time. I was extremely impressed and set that operating proficiency and station as a goal.

While in Seattle taking a 1st Class radiotelephone commercial license test with other students, I took the General class amateur license test the next day.

When matters progressed to passing the code-sending test, I set my bug down next to an antique straight key that was screwed down to the testing table. The wires to it would not reach my bug and the examiner said I had to provide the means to connect it. I proceeded to flunk using that antique key. It's one of those unforgettable events. I returned months later armed with two clip-leads and became WA7DOW. 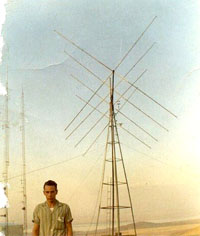 Me at Jump Off Joe Butte near Kennewick, WA, with my quad -- I was 22 years old. In 1965 I became an employee of a radio communications service shop in Yakima, WA. Realizing a city lot was not a place to accomplish the ham radio goal, I managed to wrangle my employer into permitting John, K7GGJ and myself to build a HF station at one of his butte top sites in 1967 (station #1).

In 1968 a new dam on the Columbia River terminated my other hobbies -- goose hunting and steelhead fishing. That combined with a looming military matter enticed me to meet my Canadian relatives.

I became an employee of Canadian Motorola that year, and later established an independent MSS radio communications service shop at Woss, BC, in 1969. I passed the Advanced license test and became VE7CCK in 1970. It was a bad CW call and I received the call VE7DHV in 1971.

Woss is located in a valley bottom and therefore the ham radio goal could not be realized there. 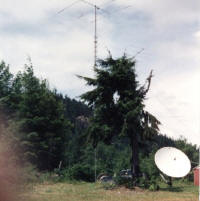 Station #2a -- about 5 km. from Station #2. The business expanded to the Sayward Valley where I built a home on two acres in 1989. It was up on the east side of the valley. The sunspots were excellent and the ham radio goal bit hard.

My business leased a property on the west side of the Sayward Valley where I added a 50-ft tower with an A3 tri-bander and a 40M sloping dipole in 1991 (station #2a). 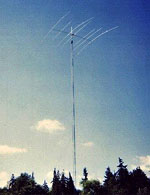 The tower at Port Angeles. Even though this station was limited by being in a valley, I got into CW contesting and received the two-letter call VE7UF.

I married in 1992, and sensing a peak in the Sayward economy, sold the business there to retire in 1993. We spent some time at our three-acre snowbird home near Port Angeles, WA, where I did some contesting with a modest two-tribander station as VE7UF/W7 (station #3).

I met Jim VE7ZO of contesting fame in 1999. Jim resided locally and despite my trailing operating skills we became friends and cooperators at my growing station until he moved in 2002.

Duane VE7UF at one of the operating positions (expanded to four positions for the 2009-2010 season).