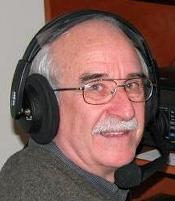 I was born and educated in Aberdeen, Scotland. At the age of 12, I built my first radio receiver which consisted of one tube powered by a large hearing aid battery. The years went by and I joined the Royal Air Force at age 18 and served with them for the next three years. I immigrated to Canada in 1957 to join a chartered bank.

On a return visit to Scotland in 1964 I had an opportunity to listen to an old short wave receiver at the home of my father-in-law. On returning to Canada I purchased a Hallicrafters S 120 receiver and proceeded to become an SWL. Very soon I became aware that, if I used the BFO, I could pick up Morse code and a strange kind of modulation, which I subsequently learned was called SSB!

As luck would have it I had just bought my first home across the fence from a ham called Pete, whose call was VE7BPB and who had a friend called Don, VE7BLM. I can still remember Petes shack; he had it set up in a cupboard and his single 807 glowed in the dark!

By this time I was working for the Attorney Generals Department, which required me to travel extensively throughout British Columbia, inspecting credit unions. All my out-of-town travel allowed me lots of spare time in the evenings, which I used to study for my ham radio license. I recall continually borrowing a large Basic Electronics book from the local library plus I bought the ARRL book called Learning The Radio Telegraph Code. Armed with these two publications I studied over the next year or so and I passed my Amateur License in February 1966 under the watchful eye (and ear) of Inspector Nelson Smith who issued me the call of VE7BCP.

I then proceeded to build a power supply for an old ARC 5 transmitter using a pair of 1625s and, I think, an 6AG7. I was able to buy a wonderful Hammurland HQ 170 receiver. As I still have all my logbooks I can record that my first QSO was WB6FNO in Garden Grove, CA. on April 7, 1966. I can still remember the thrill of that first QSO on 40 metres using a G5RV antenna!

At an early stage in my ham career I became interested in DX and, in July 1972, I received my DXCC certificate from the ARRL which allowed me to join the BCDX Club. I enjoyed meeting many of the club members in the Lower Mainland before my move to Courtenay in June 1977 to assume the position of the CEO of Comox Valley Credit Union.

In July 1981 I received a telephone call from the Department of Communications offering me the call sign of VE7NS which I gladly accepted. I was to find out later that DOC Inspector Nelson Smith originally owned the call and, of course, he was the examiner for my first amateur license. I feel honored to have been assigned his call sign as I found him to be real gentlemen in dealing with a nervous prospective ham at the DOC HQ in Vancouver back in 1966.

It was about the time of my retirement in 1995 that I became interested in contesting, and in 1997, I traveled to Scotland to join the GM7V contest team during CQ WW SSB. This was particularly significant for me as I was able to operate from the land of my birth as GM/VE7NS before and after the contest from the home of GM3WOJ, Chris. I have also had the privilege of operating the CQ WW SSB contest on a couple of occasions at the contest station of Gord, VE6SV. 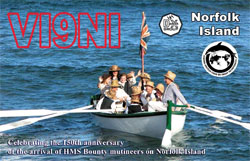 In 2005 I began an exchange of emails with Bill, VK4FW, related to possible DXpeditions to some of the Pacific islands. This resulted in me joining the Oceania Amateur Radio DX Group (ODXG) and the privilege of participating in an operation to Norfolk Island (OC-005) as VI9NI from May 31 to June 18, 2006.

This operation was part of the commemoration of the 150th anniversary of the landing of the HMS Bounty mutineers from Pitcairn Island.

The ODXG team worked 16,415 QSOs of which 10,150 were on CW. It certainly was a wonderful experience for me 'being' the DX rather than chasing it! In addition I had an opportunity to use the N1MM contest program for the first time working the pileups. A real bonus was my stay on Norfolk Island. It is a wonderful little island only 40 sq. km. in area complete with a small airport that handles Boeing 737s from Auckland and Brisbane. Whats next? Possibly another Pacific Island destination with ODXG.

My enthusiasm for the hobby has not waned over the years and I still enjoy operating both CW and SSB for chasing DX and participating in many of the popular contests. Currently my station consists of an FT1000D and an FT1000MP using a Force 12 C31XR for 20-15-10M, a Mosley TW33m for 30-17-12M on separate 48 towers, an inverted L for 160M, and, courtesy of Jason VE7AG, high dipoles for 80M and 40M. Recently I acquired an SB220 amplifier that I use to snag the rarer ones, but I always enjoy working the contests barefoot. 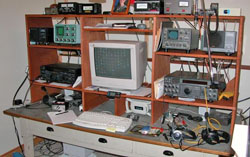 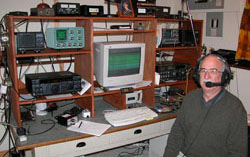 In my newly renovated shack (March 2003) 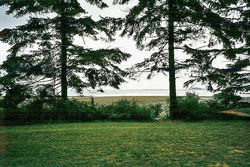 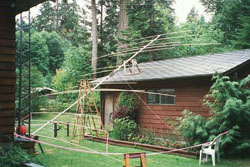