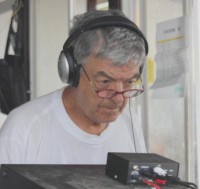 Operating on Malpelo in 2012. I first became interested in radio at the age of 11 when I received a crystal set with earphones in 1948. Many a night was spent in bed listening to the local radio programs and Maple Leaf hockey games in Toronto where I lived.

Later I was to move with the family to Winnipeg where, at the University of Manitoba I was to meet a new friend who introduced me to Ham Radio and was to become my 'Elmer' in giving me code and technical lessons toward my ticket.

On May 24, 1957, I took my exam and, after failing two tapes at the mandatory 10 wpm of the CW test, put on my jacket with disgust, planning to walk out.

The Radio Inspector who must have been in a benevolent mood that day, suggested I take one more tape at 15 wpm. For some reason or other I aced the faster code tape (probably because the dot to dash ratio seemed a little more distinctive) and was issued my initials and the call VE4SW. 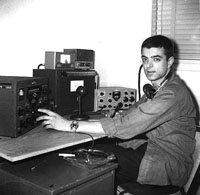 By that time, after getting my WAS Award, I was hooked on DXing and CW and took the opportunity to change my call to a more CW-rhythm-oriented VE4XJ, a call I held for 22 years apart from three years as VE5XJ in Regina, Saskatchewan.

In 1980 I moved to BC and was issued VE7EXJ -- a three-letter call! That was enough to put me off ham radio for nearly five years along with sharing my ham shack with the washer and dryer. I received my current call VE7CT in 1985 and hold it to this day.

The interest in DXing continued and in 1990 along with VE7SV and a team of international hams, was privileged to go on a high-profile DXpedition to Conway Reef as 3D2AM. I also held a Fijian call 3D2XJ for five years although I never put it to good use. Again in 2000, I was invited on another high-profile DXpedition K5K on Kingman Reef with a stop at Palmyra. Here, I did not get the chance to operate as it was only a short stopover on the way to Kingman, but did operate as T32R from Kiribati (Christmas Island) while awaiting our boat transportation. 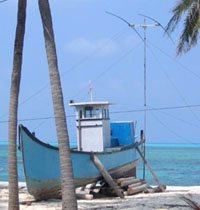 One of the 2-element
SteppIR yagis at VU7RG In the fall of 2005 I was part of the K7C DXpedition to Kure Island. In January 2007 I was privileged to  be a member of the VU7RG Hamfest and was part of the team that went to Agatti in the Lakshadweep Islands.

In 2009, I was a team member for the full two weeks on the K5D dxpedition to Desecheo Island and in October of 2010, operated from PJ6A Saba Island during the political changes to the Netherlands Antilles in which the two present entities were split up and now represent four new entities in the ARRL DXCC Award Program. Curacao and Dutch St. Maarten each became autonomous and Bonaire, St. Eustatius and Saba elected to remain under the control of the Netherlands.

The year 2012 found me on the HK0NA Malpelo Island Dx-pedition which, apart from radio was a challenge in physical endurance due to the heat and steep terrain of the 86 acre sheer rock island.

A two month steep hill power walk nearly every day on the roads around my home made me fit enough not only to challenge the mountainous terrain of Mapelo but to conquer it. Along with a team of multi-national hams we set a tent and generator total Q record of over 195,000. Apart from either a sub Saharan desert region or Antarctica area it is hard to imagine a tougher environment. It was an accomplishment and experience I shall never forget.

I am currently on the DXCC Honor Roll with 340/369 Entities confirmed, as well as holding the WAZ and DXCC-QRP awards. It is my hope to go on at least one or two more expeditions and know I am being considered for upcoming adventures.

It may sound exciting to some to be able to go on trips to exotic places, but in reality it is very hard and at times boring work to give out contacts for 10 days and nights with interrupted sleep patterns. Often the weather is either too hot or too cold and the food can be downright mundane, but its all in aid of giving a new one to the deserving.

At times, DXpeditions are without a doubt a true test of personal stamina. It is, however, most satisfying to be on the other end and know that you have made it exciting for someone to 'work' a new one. 'Tis better to give than receive.'

2014 brought an exciting expedition which turned out to be the best that I have been on in all the years I have been in the Dx-pedition business.

Amsterdam Island, deep in the Indian Ocean is a French possession bordering the Antarctic area and was number 4 or 5 on the worlds most-wanted list. FT5ZM brought 170K contacts in the 17 or so days on the Island. That included set-up and take-down of all our equipment. We were treated royally by the French contingent, ate well enough that anyone who lost weight on the nine-day boat ride (each way) from Fremantle Australia, certainly regained it while there.

If I could, I would go back in a heartbeat. 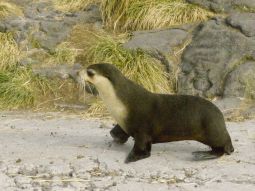 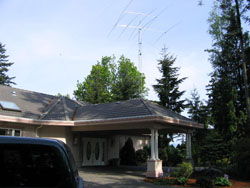 Antennas at VE7CT on an 80ft aluminum tower. 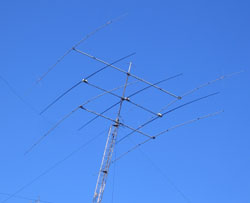 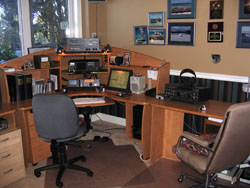 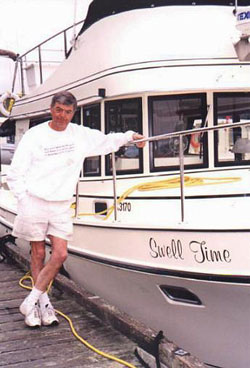