While my interest and involvement in radio dates back to the '60s, I wasn't licensed until the late 1990s; initially as VE7AVV. In November 2005 my call changed to VE7BZ. 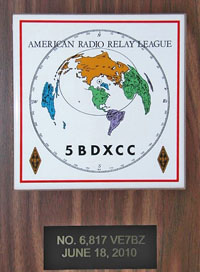 At present I have worked 330 countries (mixed mode) and of that total, 186 countries were on CW. Of particular interest to me are the 177 countries I have worked on 80M and 78 countries worked on 160M. In June 2010 I applied for my 5 Band DXCC award and now all I have to do is work a few more on 160m to make it 6 Band DXCC. So I've been working hard to make up for lost opportunities in missed solar cycles.

After a 30-year career in the telecommunications industry, I had the extremely good fortune to retire at an early age and start a second career working in emergency services for local government.

Working almost exclusively in the field of VHF commercial radio applications that support emergency services, the parallels to ham radio are too numerous to mention on a day-to-day basis. So it's the best of both worlds for a self-described 'obsessive radio guy.'

Over the years, my career has spanned a host of technical and senior managerial positions -- but I was never far from my interest in ham radio. During my working years, I was invited to participate in numerous big radio, tower and antenna projects. So when it came time to build my first station I selected the best examples from the past and incorporated them into my station.

In the fall of 1995, StoneyGround Station was born with a few simple wire antennas on an acreage near the southeast coast of Vancouver Island (NA-036) -- 6 miles south of Duncan, BC.

With my first retirement in mid-1999 came the luxury of additional time and the opportunity to begin building a bigger station. A 50-foot Delhi tower was installed in September 1999 and topped off with a Hy-Gain TH6-DXX. In August 2009 the original Delhi tower was removed and upgraded with a new heavy-duty tower complete with T2X rotor. The TH6 was replaced with a completely refurbished TH7-DXX.

Using the big trees on the acreage, a number of large wire antennas were constructed for the low bands. I have two dipoles at right-angles to one another for both 80M and 40M; both sets of antennas are at 115 feet. For 160M I use an Inverted 'L' (between two trees) that has a 106-foot vertical section, two 135-foot raised radials and number of ground-based radials.

In addition I have a 480' beverage for 160M that runs northeast out into the back of the property. The entire station is built using the PolyPhaser design system for grounding.

Inside the shack, I use a YAESU FT-2000 (linked to a DMU-2000) which drives an Alpha 99 amp. For occasional contest work I use the N1MM software linked to a ZS4TX Super Combo Keyer. Given my interest in the low bands, I installed both the YAESU MTU A (160m) and MTU B (80m/40m) outboard RF uTuning kits. They really do make a difference when working a weak signal in an elevated noise situation. All the components that make up the FT-2000 package work very nicely together.

Over the years, a liberal mix of patience coupled with due diligence research, attention to detail, a great deal of listening and lots of testing has produced a station that in combination with its immediate surroundings appears to play very well. Im delighted with the overall performance of my creation!

In the words of a legendary character -- none other than the Old Timer -- I firmly believe "DX'ing is a state of mind" and you should "judge a DXer by what they are and what they think, not what they have worked." I learned a long time ago why Deserving has a capital D.


Other links of interest...