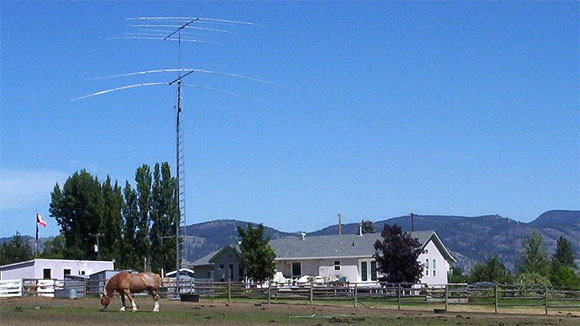 The VE7BV farm in Kamloops, BC, looking northeast

I was born September 24, 1953, at Royal Columbian Hospital in New Westminster, BC. I was the first of four children for my parents who opened a pharmacy and moved to White Rock when I was one year old.

My interest in radio began with broadcast band DXing which prompted me to join the International Radio Club of America in 1966.

I remember receiving a microscope one Christmas and upsetting my parents because I spent all that day listening to international short-wave broadcasts on a receiver they had purchased at the same time.

My parents had also bought me a pair of CB walkie-talkies and that started my interest in communications. I did all sorts of experiments to make those 50-mW portables reach greater and greater distances.

Yaesu FT-101 My interest in CB-radio was decimated by Frank Kish, VE7BHE (SK), (my eventual Elmer) after a visit to his home. He lent me a Heathkit AR3 to practice receiving code and I made an oscillator from an electronic board kit my parents purchased. Added encouragement to become a ham came from Graham Foster, VE7BTV (SK) another family friend.

I recall ordering a book titled Ham Handbook for Beginners which I memorized to the page numbers. During the summer of 1970 in Vancouver, BC, I wrote my exam and scored 100% on everything possible. My first call was VE7BCU.

In the fall of 1971, I started at UBC (the University of British Columbia) and became a member of HAMSOC, or the UBC Amateur Radio Society. In addition to making many life-long friends, I was introduced to DXing, RTTY and contesting. Almost immediately my code speed went from about 13 wpm to at least double in short order.

I bought a Heathkit DX-60B and four 80-meter crystals from Rendal-Parett Electronics in Vancouver, BC, and the following year built a Heathkit HG10B VFO to allow me to work the DX I had been hearing. The next year I purchased a Yaesu-FT101B from Russ Mack at ARMACO.

I worked during those years for BC TEL, Canada Customs, the family pharmacy, and graduated from UBC in 1976 with a B.Sc. in Pharmacy. That summer I also completed my pilots license with night rating, which I still use to this day.

Loving languages, I went to Guatemala, originally to learn Spanish and stayed until 1978 when I married Chiqui (Isabel) -- one of my Spanish teachers. While there I also met Paul, TG9PE (no longer active), an evangelical missionary.

In 1978 we returned to Kamloops and Steven, our first son, was born in 1983. Later that year we moved down the road to Chase -- where we lived until 1986. During this time I was continually active working many new countries using my G5RV and GEM quad. I received my mixed DXCC Award in 1984.

Peter Pel, VE7CV, who has become a lifelong DX friend, was instrumental in many of my DX accomplishments. In 1986 I had another enjoyable trip to Guatemala and Honduras where I operated as VE7BCU/TG9 and VE7BCU/HR5RCA. Rodolfo, HR5RCA (SK) my then brother-in-law, was the coffee minister in Honduras. He had a large plantation, but was unfortunately killed by Honduran guerillas shortly after our visit. During this visit I became friends with Gerardo Poitevin, TG9HH (no longer active) in Guatemala.

From 1986 through 1995 I operated a Peoples Drug Mart across the street from the Ocean Park shopping centre which was located near White Rock in South Surrey. Christopher, our second son was born in 1987.

In 1989 I received the call VE7BV. With the encouragement of Sid Kemp, VE7MT (no longer active), I rejoined the UBC Amateur Radio Society. At the invitation of John Draper, VE7WQ and Ken Thompson, the Dean of municipal lawyers, VE7BXG (SK) I was invited to join the BCDX club. I bought a tubular tower from VE7BXG (SK) and two beams from Gerry, VE7GRD (SK). My country totals continued to climb during this time.

Back to the business -- when the pharmacy lease came due, I realized that I would have to move the business so I decided on a three-way partnership with my father and his partner. We purchased the Pharmasave in the Ocean Park shopping centre. The partnership did not work, plus I was going through a divorce, so I moved to Merritt in 1997.

Isabel A year later, I met Isabel Healy VE7ICH, a social worker and Anglican priest intern. We were married in July 1999 at the Cathedral in New Westminster, by Bishop Jim Cruickshank. The service included a military band, the cathedral choir and my friend Peter Pel, VE7CV, as our best man. Isabel and I lived on a large cattle ranch just outside of Merritt during the time she was finishing her masters degree, and before her ordination.

I began to accelerate my country totals with the use of beams tied to fence posts on masts. The use of the DX Summit and other packet clusters allowed me to work a maximum number of countries, and I quickly hit the 300 mixed entity mark. 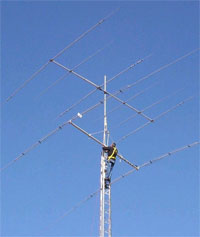 Rick Young VE7RY installing a 40M beam under the TH6DXX (not shown 160M and 80M/30M inverted-Vees Along with five horses, and numerous other pets, we moved to Kamloops in 2003 and purchased a hobby farm, where a number of the Kamloops club members (VE7ALN (SK), VE7PR (SK) and VE7WWW to name a few) helped me put up the 40 meter beam and TH6DXX on a 50-foot Delhi.

At this point I have confirmed 337 of 340 entities (about 346 if you include deleted entities). I completed my 5BDXCC and am now on the DXCC Honour Roll, and have about 1,820 DXCC Challenge entities. Isabel now has DXCC with 125 confirmed and 136 worked.

My long work hours coupled with many 7-day weeks makes working the rarer DXpeditions a little more difficult -- but without a challenge life would be easy. In addition, I have recently returned to my studies in classical piano and I am currently preparing for my Canadian RCM Grade 9 exam.

My ham radio experience involves numerous wonderful personal relationships coupled with countless hours fishing on the radio. I enjoy many facets of the hobby from two meters to working pileups of South American stations in Spanish on 40 meters. I work about 50/50 CW and SSB.

Son Stephen has a Bachelor of Science degree from Thompson Rivers University in Kamploops, and is currently doing a post-baccalaureate diploma in journalism -- hoping to proceed to do a master's in Steelhead research. He has done ecology-type work in Africa and South America. My youngest son Christopher has a Batchelor of Business Administration from Thompson Rivers University, and works in Calgary as an oil company safety officer. Both Steven and Christopher are fluent in Spanish.

Isabel is rector at St. Georges Anglican Church in North Kamloops, and chaplain for the Rocky Mountain Rangers. I am currently the relief pharmacist for Wal-Mart in BC.

In the most recent times, Isabel and I have become friends with Ian W7IAN and his wife Jerri WA7ELK who is a renowned Pacific Northwest painter. Ian and I correspond daily and try to collect the most colorful cards from each ARRL entity.

To put my radio experiences to date in perspective:

My most pleasant ham radio memory
Operating in Honduras and talking with all my friends from Kamloops. My biggest disappointment
Missing the opportunity to meet Martti, OH2BH at the DX Convention in 2003 because of an emergency at work. Most unusual radio memory
Remembering the long wire clandestinely strung between Gage Towers and Buchanan Tower at UBC (17 floor level, and ¼ mile apart). Most fulfilling radio memory
Handling volumes of emergency traffic in Spanish during the Mexico City earthquake.
I look forward to working you in the pileups. 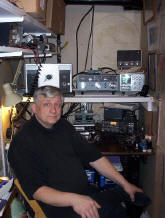 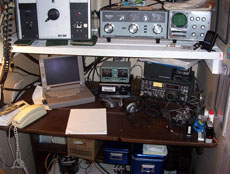 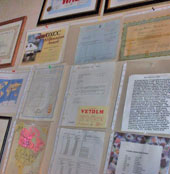 Isabel, VE7ICH and myself at the Costco Party in Kamloops

Ian, W7IAN, myself, and Isabel, VE7ICH being watched by a pirate in Ocean Shores, WA (photo by Jerri WA7ELK) 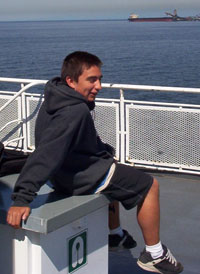 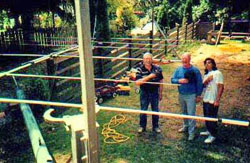 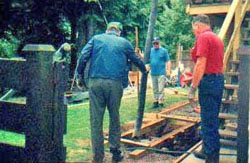 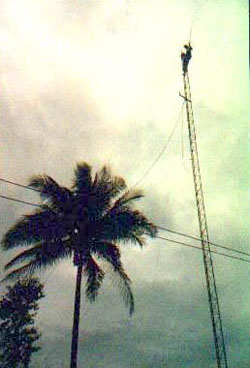 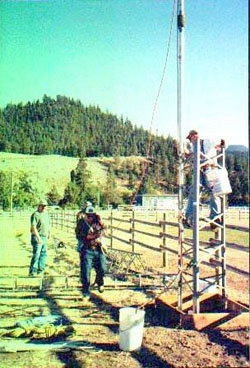 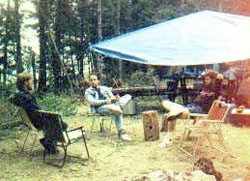